National dishes of Czech cuisine. What to eat in the Czech Republic 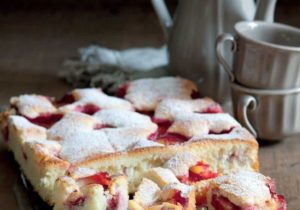 Bublanina is a traditional dish of Czech cuisine

Bublanina is a traditional dish of Czech cuisine. Bublanina is a light sponge cake made from eggs, butter, sugar, flour and various fruits such as cherries, strawberries, blueberries, apricots, as well as fragrant plums and pears.

Sometimes the sponge cake is lightly seasoned with vanilla or lemon zest, which is perfectly combined with a delicate sponge cake and juicy fruits. It is usually consumed in a warm form and often sprinkled with a thin layer of powdered sugar before serving. Although Bublanina is not luxurious and refined, it is one of the most famous desserts. It is usually prepared at home as an everyday dessert or a quick sweet treat, but it can also be found in traditional Czech bakeries.

What is the secret of Czech waffles? Among the Czech souvenir brands are round thin crispy waffles called “Lázeńské oplatky”. Externally, Lázeńské oplatky is a thin wafer–like plate baked from unleavened dough, usually round or rectangular in shape, often with an embossed image of Christmas motifs.

What to eat in Prague – street food. The appearance of oplatky does not make a special impression. Two thin round (15-20 cm in diameter) waffles with a small layer of filling between them and that’s it! No cream roses, powdered sugar and other decorations for you. Except that the coat of arms of the factory is on the waffle itself. The taste is quite another matter: I ate one, the second, and my hand is reaching for my wallet — I want a third. It’s necessary to try all the fillers. Prague sweet street food. Oplatky has more than 15 types of fillings: hazelnuts; almonds; hazelnuts; white and milk chocolate; tiramisu; vanilla; caramel; coffee; cocoa; nougat; cinnamon and others. 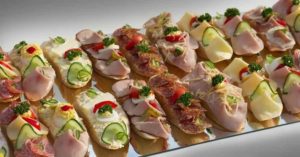 Although there are many sandwiches with an open lid all over the world, the bread is unique for its unusual combination of fillings, a variety of flavors, as well as careful layout and serving.

Sandwiches usually consist of thin slices of white bread covered with spreads such as potato salad, cream cheese and lobster paste, as well as with ingredients such as tomatoes, salmon, capers, brie cheese, boiled ham or pepperoni.

The original chlebíčky was invented by Jan Paukert at the beginning of the 20th century in Prague and consisted of Prague ham, pieces of hard-boiled egg, a piece of Emmental cheese, tomato, Hungarian salami and potato salad.

Today, bread rolls are the main product of numerous Czech holidays, birthdays, with an infinite number of varieties and fillings. 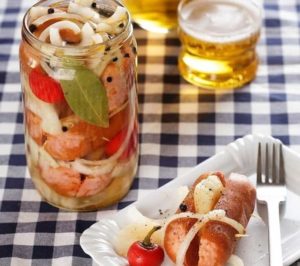 Utopians is a popular Czech dish that is usually served in pubs and bars as a snack.

What is “utopenci”? These are pickled sausages with pieces of fat in the marinade, sometimes with the addition of tomato sauce. They are poured raw with cold or hot marinade and left to soak properly for several days (from 3 days to 3 weeks). Utopians are a traditional Czech beer snack — spicy, fragrant, soft, surprisingly delicious! The dish of Czech cuisine is traditionally eaten cold with white bread.

The name utopenci translates as drowned because of the belief that the inventor of the dish drowned while working at his mill. Others believe that the name comes from the fact that sausages are drowned in marinade. Utopians can be found all over the Czech Republic, in bars, houses and even in some restaurants. 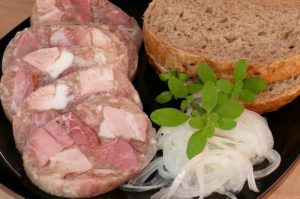 Tlacenka – Czech food. Tlacenka (in Czech – tlacenka) is a meat dish resembling a strong jelly or a brawn made from pork legs, tongue or offal and consumed with vinegar. When served, it is flavored with pepper, onion and vinegar.

It consists of various pork pieces, mainly offal. Tlacenka usually has the shape of long and large cylindrical tubes and is served in thick slices. This traditional Czech product with its rough texture resembles a coarse pate, and it is usually eaten with diced raw onions, rye bread and a small amount of vinegar.

5 best places to have breakfast in Prague 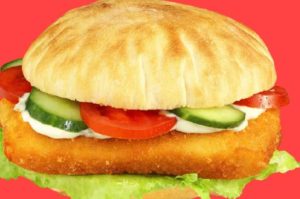 Smazak is a national dish in the Czech Republic. Smazeny syr or simply smazak in Czech. This is what the Czechs call a piece of fried cheese.

Czechs love fried cheese in breadcrumbs. Usually smazhak is served as a main dish along with French fries and vegetables. But our favorite, which beats all American fast food, is a burger with smazak, Tatar sauce, lettuce and cucumber. We consider this combination to be ideal. 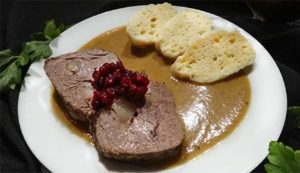 National food in the Czech Republic: Svíčková na smetaně. This delicious Czech beef dish is one of the most famous creations of Czech cuisine. It is made from marinated stewed beef, usually tenderloin, served in a creamy vegetable sauce of carrots, celery and parsley root. The dish is usually seasoned with thyme, bay leaf and allspice, which give the dish a bold taste.

Czech meat dishes. However, the hallmark of Svíčková is a creamy sauce made from mashed or mashed root vegetables and sour cream. The recipe for this traditional dish first appeared in 1805. He was strongly influenced by Bavarian cuisine and traditional French culinary techniques, in the recipes of which there is a lot of butter and cream.

Svichkova is traditionally served with the famous soft Czech dumplings, slightly tart cranberry sauce, a spoonful of whipped cream and a slice of lemon.

What to eat in Prague Czech Republic – Svíčková na smetaně.

This wonderful dish of tender beef with creamy vegetable sauce and with the addition of sweet and sour cranberries is a universal love of the Czech nation. Moreover, knedlik are served with meat in svichkov — another pride of the Czech people. The latter are “pancakes” made of bread or potatoes. Don’t try to leave them on the plate! The locals will think you’re crazy. Or they will look condescendingly, thinking that you will never understand the delights of Czech cuisine. By the way, when you come to a Czech restaurant for lunch, you need to take into account that local chefs do not always attach importance to the appearance of food. So, svichkova on sour cream will most likely not look super aesthetically pleasing, but do not worry — it will not affect the taste qualities.

Rohlíku – favorite food of the czechs 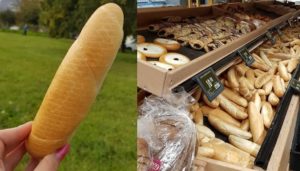 National food in the Czech Republic: Svíčková . But the Czechs from childhood to the end of their lives are loyal to rohlíku. What is it? This bakery product is white in color, has a light sweet taste. Crispy on top, soft inside. It doesn’t look like white bread.

Rohliks are sold piece by piece in such huge trays. Usually Czechs buy them in large quantities. 10 pieces per family, and this, attention, is for one day. At breakfast, they can eat 2 things and also take a snack to work / study.

What is Prague famous for food. Usually eaten with pamazankou. This is what you smear on bread. It can be cheese or finely chopped salad. Also suitable for sandwiches or as an addition to food. Rohlík can also eat without anything at all. It’s easy to take one loaf during a snack, but it’s rather rare.

Favorite dishes in the Czech Republic. Sometimes rohlík is replaced by kaiserku. I associate this bakery product more with bread. It can be sprinkled with sesame seeds, chia seeds, poppy seeds. An important point is that most Czechs eat only fresh pastries. That’s why they go to the store every day. If the rohlík is on the shelf for at least a day, I send it to the breadcrumbs and then they make breadcrumbs out of it. 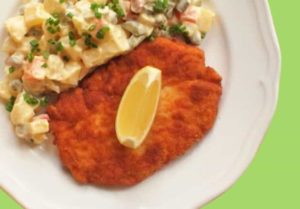 A popular dish of Czech cuisine is schnitzel. Just schnitzel, just Czech schnitzel. But so delicious! Chicken pie is our favorite. It is usually served with a slice of lemon, potatoes and potato salad (a bit like our olivier). The main advantage is that such a dish costs almost nothing, and they put two or three schnitzels themselves. We always eat up quickly and take half of the plate home.

What is cooked for lunch in the Czech Republic

A popular dish of the Czech Republic is Katów šlech. Piquant, unusual, delicious. The national Czech food Katów šlech is very popular in the Czech Republic. It is a large dranik with a filling of fried meat and vegetables. The juicy filling is simply gorgeous, and the cooking itself is very simple. Czech food “Katów šlech” can be served for lunch, Katův šlech – czech homemade food.

Classic Czech cuisine Vepřo knedlo zelo. Veprevo knee is a national Czech dish. Pork lovers and those who want to taste something really Czech dishes – we recommend pork with stewed sauerkraut and knedlik. An uncomplicated but hearty dish is a classic of Czech cuisine. The secret of meat in this dish is baking in beer. Usually beer is diluted with water in a ratio of 1:1. Czechs really like Vepřo knedlo zelo, and tourists are happy.

Boar knee or pork knuckle in Czech is a traditional dish of the Czech Republic. Having tasted this dish once, you will cook it often. After all, the dish is incredibly appetizing, beautiful and delicious! As a rule, the knuckle is first boiled, then baked. But there is another way, without cooking. The dish is served with a vegetable side dish and Czech beer.

Bramboracka soup and its types