Bramboračka or potato soup in the Czech Republic. Types of Czech soups and bramboracka recipe with mushrooms

Bramborachka (Bramboračka) or potato soup (bramborová polévka) is a traditional thick Czech soup. A similar dish is also found in Slovak, Polish and German cuisine. It is prepared from potatoes and root vegetables (carrots, celery, root parsley). To add flavor, mushrooms (fresh and dried) are added to it. In the Czech version of the dish, garlic and marjoram are necessarily present. The consistency is thick, creamy. Czech bramboracka soup.

The traditional Czech soup bramboracka in the Czech Republic is called voles (Polévky). In almost any cafe, even the smallest, there will definitely be a couple of voles on the menu. Most soups have a thick consistency. These are most often pureed soups, but you can also find more liquid ones. Popular soups in the Czech Republic. 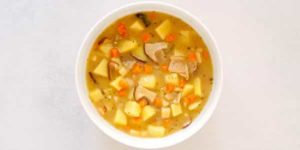 Bramborová polévka or bramboracka (bramborachka) – thick potato soup with smoked meats/mushrooms. It is filled with sour cream mixed with flour. Although it was originally considered food for the poor, this creamy potato soup, known as bramborachka, has become one of the classic dishes of Czech cuisine.

Koprová polévka — dill soup on sour milk with sour cream and fresh herbs. It is considered a good remedy for a hangover.

DršťKová polévka – tripe soup with spices. It was once the main food of peasants in the Czech Republic. 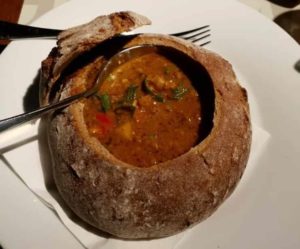 In my opinion, the most delicious Czech soup is vole in bread (Polevka v chlebu) or gulašova polevka – goulash soup in bread. Meat, fragrant and very satisfying.

Czech bramboracka soup. The ingredients are pretty simple. The basis of goulash is beef or veal tenderloin. Potatoes and onions are added from vegetables. Flour is used for density. Spices give a unique taste: paprika, chili pepper, cumin, marjoram, as well as herbs, which decorate the finished dish. And, of course, the dish has an unusual presentation. The soup is poured into a bowl of fresh bread. By the way, the bread itself is very tasty, with a crispy crust, so you can safely eat the lid. The price of goulash soup in the Czech Republic varies from place to place, on average, it is 80-100 CZK Such a dish can easily be eaten. Now nutritionists say that soups are not healthy dishes at all. Well, let them talk… 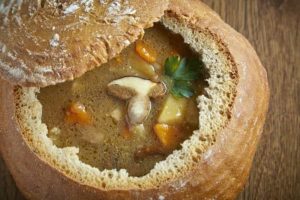 How to cook bramboracka – Czech soup with mushrooms

The soup is very tasty, with a rich aroma of porcini mushrooms and a delicate taste, which is given to the dish by cream. By the way, cream is an optional ingredient in this case – this soup is often served without them or even manages to fill with sour cream. To my taste, the creamy version is the most delicious, so I give the recipe with cream. The cooking time of Czech bramboracka soup is 35 minutes. 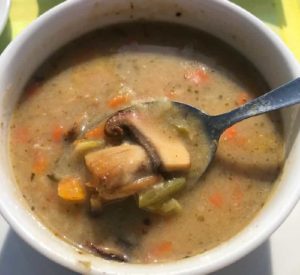 Ingredients for bramboracka soup with mushrooms for 6 servings:

Finely chop the onion. Cut the potatoes into cubes.
In a saucepan over medium heat, melt the butter. Put the onion and fry. stirring until translucent, about 3-4 minutes.
Add marjoram and cumin, fry for another minute. Add the flour and fry, stirring, until it acquires a golden hue, 1-2 minutes.
Stirring intensively with a whisk, pour in the hot broth. Add the potatoes and cook over medium heat for about 10 minutes.
Meanwhile, we cut the mushrooms – I have an average cube, but you can cut smaller or larger.
Add to the potatoes and cook for another 15 minutes.
Salt to taste. Add cream and grated garlic, bring to a boil. Turn it off.
We serve. Enjoy your meal!

Any dried mushrooms will do: white, chanterelles, assorted.
You can cook soup on water, but I still recommend not to be lazy and cook the broth. It’s much tastier this way.
Do not rush to add onions to the pan. Make sure that the root vegetables are well fried and become quite soft. The future taste largely depends on this.Garlic is best chopped just before adding to the soup. So he will give more taste.
I recommend rubbing the marjoram a little in your hands before adding it to the soup. This will enhance its flavor.