Time to read: 5 minutes
Content hide
1. Garlic soup “cesnecka” is a national Czech dish
1.1. “Cesnecka” – nuances of cooking garlic soup in the Czech Republic
2. What is cesnecka served with?
2.1. How is cesnecka served?
3. So, for cesnecka you will need the following Ingredients
4. Cooking “cesnecka” soup
4.1. Похожие записи:

Cesnecka – soup with garlic in Czech. The recipe for making a very tasty cesnecka from the Czech chef 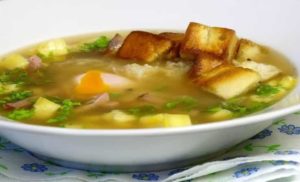 Cesnecka – soup with garlic in Czech

Garlic soup “cesnecka”. In Czech folklore, the best cure for a cold or hangover is cesnecka, a traditional garlic chowder in the Czech Republic. Although garlic is a key ingredient, the soup also includes potatoes, chicken or meat broth, onions and traditional spices such as cumin and marjoram and sometimes meat (smoked meats). This healthy dish is usually covered with grated cheese and crispy croutons, and it is usually served as a snack.

“If cesnecka does not lift me, then nothing will help,” the Czechs say. The Czechs themselves say that they cook it in case you need to get back on your feet. Either the morning after a prolonged party with an excess of alcohol, or if you have a cold. 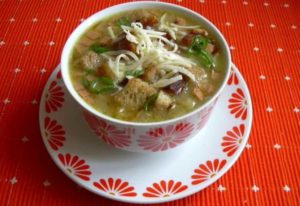 Classic Česnečka is prepared on the basis of chicken broth with the addition of potatoes, eggs and a large amount of garlic. Although I got to the deeper origin stories, and the most original version was not prepared on meat broth. It was a rough peasant poor food. It was born from what it was, and meat was a luxury, so for satiety and fat content, lard and ghee were added. It was then that chicken broth appeared.

Now there are a great many variations of cesnecka soup, ranging from authentic chowder from Bohemia, ending with modern variations with the addition of new products.

“Cesnecka” – nuances of cooking garlic soup in the Czech Republic

Garlic soup can be of different consistency. Someone prefers a creamy consistency, and someone likes a clear broth with pieces of garlic and herbs. There is a suitable option for everyone. Someone adds more eggs, and someone does not put them at all. Classic soup with garlic in Czech.

Don’t spare the garlic! That’s why garlic soup is its main ingredient!

Do not digest garlic and add it gradually, in several stages, so it will give its taste and aroma better.

If you add an egg, then pour it in a thin stream, stirring constantly so that the egg “flakes” are as small as possible.

What is cesnecka served with? 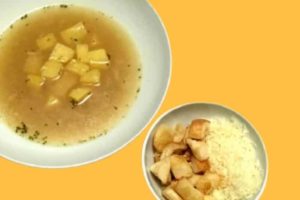 Usually cesnecka soup is served with croutons. Ideal – homemade, which can be fried in butter (white bread), can be dried in the oven (rye bread). I did it my way – fried them in lard with the addition of the same grated garlic, so that the garlic spirit is just wow! You can also make cheese croutons. The soup is seasoned with chopped herbs: leeks, parsley, dill, and grated cheese.

Very tasty Czech soup česnečka. Traditional Czech restaurants often serve cesnecka in a loaf of bread. Well, this is, of course, such … exotic, although there is nothing complicated about it. If you use this option, then you can no longer add croutons, so that flour busting does not happen.

I made a version of the soup on smoked meats. I cooked the broth on the bones from the smoked side, then I introduced smoked meat into the soup, well, lard … where without it. Of course, such a soup can not be called a dietary dish. But if you want an easier option – cook chicken broth and do not add meat to the soup, much less smoked meat, lard or butter.

So, for cesnecka you will need the following Ingredients 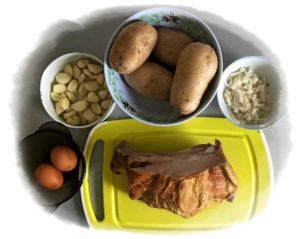 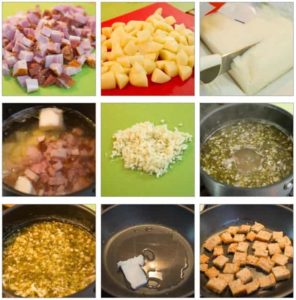 Garlic soup Recipe. Cook the chicken broth. I used the bones from the smoked brisket. Cut the brisket or your other favorite smoked meats, pork ribs into small pieces, about 1-1.5 cm. Cut the potatoes into the same even cubes. Peel the garlic and chop it. You can use a chopper or cut it by hand.

Put the diced potatoes into the broth and bring to a boil.

Spread the chopped smoked meats on a frying pan heated with oil and fry them for a few minutes. After the potatoes have boiled, add the fried smoked meats to the soup.

Put the finely chopped lard on the same frying pan where the smoked meat was fried and start melting the fat (we bring it to the flakes). If you don’t have lard, you can use ghee or butter. Adjust the amount so that the fat content of the broth becomes optimal for you and your family.

Add a little chopped garlic to the melted lard so that it gives off flavor. Fry for a few seconds, make sure that the garlic does not burn. As soon as the garlic is slightly caught, we introduce fried bacon with garlic into the soup. Add salt to taste, cumin and marjoram. Bring to a boil and cook until the potatoes are ready.

In the process of cooking, add garlic – in parts, for a special garlic flavor. Divide it into two or three parts and add it gradually. This will fill your soup with several variations of the taste and smell of garlic.

Cut slices of bread about 0.7-1 centimeter in size. You can use ready-made crackers, but ideally it is better to cut bread yourself. You can use white, you can use rye. Melt some lard in a frying pan, in which we will fry our crackers. Remove the pork rinds from the pan, leaving only the melted fat. Add a little chopped garlic there. And we send the future croutons to the pan and lightly fry them. We remove the finished crackers from the pan so that they do not overcook, pour them into a separate container.

Lightly beat the eggs. We begin to pour the beaten eggs into the soup in a smooth thin stream. Do not forget to stir constantly, otherwise the eggs will curdle. As a result, you should get egg “flakes”, without large pieces of boiled egg.

Add the remaining garlic to the soup (leave some for the croutons). Mix well. You can pepper it a little, but a little. There should be a pronounced smell of garlic, not pepper. Cover the soup with a lid and let it brew.

The soup is seasoned with chopped herbs: leeks, parsley, dill, and grated cheese.

It is advisable to serve immediately after cooking: the fresh aroma of soup and garlic croutons is indescribable! Pour the garlic on plates and sprinkle with crackers.

To prepare lean garlic, use vegetable broth. To do this, boil the celery roots in water together with carrots and onions (all ingredients need to be coarsely chopped). Add to them a delicious roast of onions, garlic and carrots. Season the broth with herbs and black pepper (peas). You can add bay leaf to the broth.