What are knedlik in the Czech Republic? What types of knedlik are there 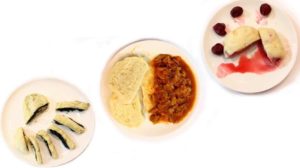 Czech cuisine is high-calorie, nutritious, meat and flour. Thick rich soups, stewed potatoes, pickles, fried meat, liver and grilled sausages are favored here, strudels and trdelniki are made of sweets. And as an addition to the meal – dumplings.

Knedlík is boiled slices of dough made of flour or potatoes, which are served with almost anything – as a snack or instead of bread. Yeast and potato dumplings are offered with meat, mushrooms, sauerkraut or stewed cabbage, bread dumplings are stuffed with liver and minced meat, and semolina and cottage cheese dumplings act as desserts, combined with fruit or chocolate.

Knedlik in different variations are found in the cuisine of Austria, Germany, Hungary, Poland, but Czech ones are considered to be the most delicious.

Lumps of dough made of flour, water and eggs have been known since ancient times, and they were especially popular in the East. In the Middle Ages, loaves were common in the Czech Republic – boiled dough or swollen bread crumbs fried over high heat. Initially, dumplings were included in the menu of the poor, but since the 17th century this dish has become a worthy addition to vegetables and meat in the houses of the public upper classes. Soon, a sweet recipe for dumplings appeared.

The main savory varieties include huskovi, made from soaked bread, bramborove, cooked with mashed potatoes, cheese, cooked with cheese, and simple yeast knedlik. 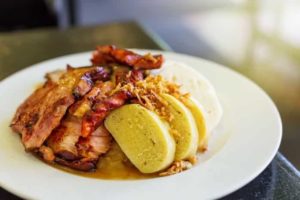 Czech Knedlík are the most common side dish in the country, which is traditionally served with grilled meat and hearty stews. Bread Knedlík.

Czech Knedlík are an exceptional feature of Czech cuisine. The most popular are classic Knedlík made of yeast dough. They are often used as a side dish for stewed cabbage, meat goulash and perkelts. Or you can just serve Knedlík with a dressing of oil, herbs and garlic. 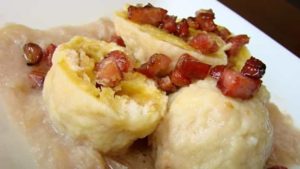 This is one of the most common and favorite Czech options for cooking dumplings.

Potato knedlík with cheese are often prepared in the Czech Republic. By the way, this delicacy got its name from the German knödel – “knot”, “dumpling”. Indeed, the viscous taste resembles dumpling dough or potato dumplings, familiar to all Slavs since childhood.

Fruit knedlík (Ovocné knedlíky). Dessert version of dumplings— boiled dough balls with fruit filling. A perfect end to a meal and an addition to tea. While sweet options are filled with fruit and served as a dessert, savory dumplings are usually formed into a roll, boiled or steamed and served sliced.

It is not only very satisfying and delicious, but also affordable. Knedlík are made from different products: from dough, from different types of meat, from fresh or boiled potatoes, from cottage cheese. There are very quick recipes that can be cooked in a hurry (for example, simple flour dumplings or dumplings from raw potatoes). There are also more complicated recipes to prepare, for example, options with stuffing.

Despite all the differences, the principle of making knedlík is the same in most cases: first, a special dough is prepared (from flour, potatoes, cottage cheese, etc.), from which small balls are formed (with or without filling). After that, they are boiled in water until ready. It is customary to serve knedlík with a variety of products – with sauces, broths, vegetable side dishes, fried onions, sour cream, fresh herbs. They are also often put in meat goulash or soup. Sweet knedlík are most often sprinkled with chopped nuts on top, poured with jam or fruit syrups. Meat or potato knedlík are traditionally served with the famous Czech beer.