Czech carp. Fried carp is a traditional custom in the Czech Republic

What are the customs of carp at Christmas in the Czech Republic? Scales of carp for luck and release of carp into the river 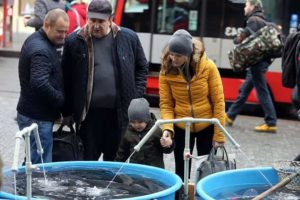 Czech carp. There are always pools with carp on squares or ordinary streets.

Sale of carp for Christmas in the Czech Republic

Carp in the Czech Republic (in Czech Kapr) refers to the traditional symbols of the Christmas holidays. A couple of weeks before Christmas, during the Advent period, tents begin to appear on the streets of every Czech city, in which there are large tanks with live fish. And there are queues for them everywhere. This is despite the fact that the Czechs generally eat little fish. But carp on the festive table is mandatory. Czech carp.

Fried carp in the Czech Republic for Christmas 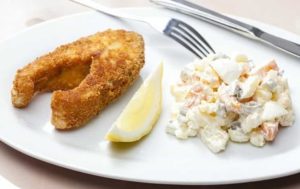 Carp for Christmas in Prague

Fried carp in the Czech Republic (smažený kapr) is the main dish on the Christmas table, along with potato salad (bramborový salát), lentil soup and Christmas braided bun (vánočka). 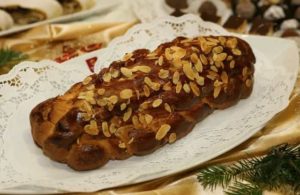 Carp appeared on the festive tables of the Czechs relatively recently: it is one of the youngest Christmas traditions. Fish dishes began to be served more and more often at the beginning of the XIX century, previously they were rather rare and were used only in the areas of pond fishing and in rich families. Currently, carp in the Czech Republic are bred especially for Christmas.

You can buy a live fish, bring it home and release it into a container with water to last until the celebration, when the head of the family will kill it. And then cook fried carp for Christmas. Or you can ask the sellers to kill and clean the fish you like. Some Czechs buy carp and release it into the river.

Carp scales for Christmas in the Czech Republic 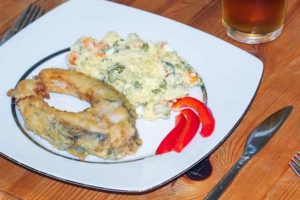 In the Czech Republic, a carp scale is for luck. At Christmas dinner, the Czechs adhere to several customs: firstly, the plate is prepared even for a casual guest, and secondly, a carp scale is placed under the plates for good luck, so that there is enough money in the New Year. As a rule, it is carried for a whole year in wallets.

The traditional custom is Christmas gingerbread. And here is the recipe for their preparation.

Carp in the bathroom 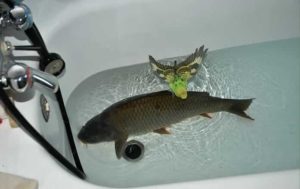 In some Czech families, the Christmas flavor cannot be imagined without a live carp swimming in the bathtub. Of course, this entertainment is intended primarily for children. However, for the fish itself, being in chlorinated water and the associated temperature shock (from the temperature difference between the water in the barrel and the bath) are detrimental. If you bring home a live fish, it is best to kill and clean it as soon as possible to save the fish from further suffering. Finding carp in the bath should be as brief as possible: you never need to leave it there all night.

Release of carp into the river in the Czech Republic

Some Czechs, with the best intentions, release carp on Christmas Eve (Generous Day) to freedom in a pond or river. Unfortunately, in this way they only expose the unfortunate fish to additional torment, because of which it is likely to die anyway. The fact is that carp hibernate in winter and are at the bottom of the pond in a stationary position. If the fish was caught in the fall, and it was constantly moving, then it does not produce special substances for wintering. In addition, he gets a temperature shock.

Therefore, the best thing to do with the purchased fish is to make fresh food from it as quickly and tastily as possible and serve it with a traditional potato salad.

Fried carp in the Czech Republic

By the way, every year on December 24, on a Generous Day, fish soup is distributed free of charge at the Camp and some other points in Prague. A variety of carp dishes in the Czech Republic is an invariable attribute of the New Year holiday.

How to cook Czech carp soup for Christmas

How to celebrate Christmas – interesting traditions and customs in the Czech Republic.

Preparation for Christmas is the Advent period.