The rules of pronunciation of the Czech language

Letters of the Czech alphabet

The first Czech language lesson for beginners. Czechs, like all Western Slavs, use the Latin alphabet.

Letters of the Czech alphabet

For designations of some Czech sounds are used unusual for us superscripts. The diacritic symbols used in Czech are called :

To indicate the softness of the upper than t and d at the end of the word and before the vowels a, o, u, the sign ‘ is used: ťukat, ďábel, ďobat, zeď.

The basic rules of pronunciation of the Czech language

3. The vowels ú and ů are pronounced the same way. Their spelling only reflects differences that existed in the past.

Note that the vowel ú is always written at the beginning of a word or after a prefix (e.g. Úhel, zúčastnit se), while the vowel ů is written in the stem and at the end of a word (e.g. domů).

This division is significant in one way for declination and in another way for spelling. You’ll notice that when i or y follow consonants, there is an i after soft consonants and y after hard consonants. Czechs learn words with ambiguous consonants which are followed by a y by heart, as so-called listed words. Foreign words are exceptions to the rule.

6. The consonants that are absent from the English alphabet are: č, ch, ř, š, ž, ď, ť, ň. Note especially ch which counts as a single letter and hard a special position in the Czech alphabet (after h).

7. p, t, k are unaspirated sounds. This means that when they are pronounced they are not accompanied by a stream of air.

8. How should ď, ť, ň be pronounced? To pronounce ď, ť and ň, imitate the sounds that your teacher produces by putting the tip of your tongue against the back of your upper gum above your front teeth. You end up pronouncing sounds similar to d, t, n, but softer.

See also  The secrets of polyglots in language learning. How to become a polyglot

Tips for a foreign student in Prague – the first semester

Assimilation type 1: At the end of a word, voiced consonants are pronounced like their voiceless counterparts. E.g.: Václav [Václaf], Cheb [Chep].

Assimilation type 2: If two consonants occur after each other in a word, the second consonant changes whether the first is voiced or not, as follows’: vklad [fklat], tužka [tuška], kdo [gdo], sbírat [zbírat].

Assimilation also affects some prepositions, e.g.z Francie [sfrancie], k domu [gdomul. If a voiced preposition is followed by a word beginning with a vowel, this consonant is pronounced as if unvoiced, e.g. z Itálie [sitálie].

‘There are regional differences to this rule, e.g. the parting salutation na shledanou is pronounced in Bohemia: [naschledanou) and in Moravia [nazhledanou).

12. The vast majority of Czech words have the stress on the first syllable e.g. náměstí, situace, analýza. The exceptions consist of a mere handful of unstressed words which take the second logical position in the sentence.

Note: When connecting a preposition with another word, the stress is placed on the preposition, e.g. ve škole.

Declensions and cases in Czech for beginners 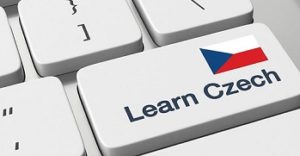 Czech language lessons for beginners for free. Czech spelling is based mainly on the phonetic principle, according to which the sounds pronounced are accurately reproduced – “as heard,that’s how it is written”: znám, tok, voda, dráha, sloužit, krásná. But from this rule there are exceptions – at the end of words, voiced ones are often traditionally written consonants that are stunned during pronunciation, and vice versa where traditionally written deaf, pronounced voiced: dub [dup], vůz [vus], svatba [svadba]. Sometimes when pronouncing a group, consonants merge into one sound:

Two letters serve to denote the long [u]

The first Czech lesson for beginners. Two letters serve to denote the long [u]: ú and ů. The letter ú is usually written in the beginning of the word and after the prefixes: úkol, neúroda, únava; the letter ů – in the middle and in the end of the word: dům, vůz, domů, dolů.

Czech lessons in Prague at language courses for foreigners

Accent in the Czech language

Czech lessons for free. It is worth paying your attention to the accent in the Czech language. From the first Czech lessons you will be taught that accent is always put first, it is the basic rule. Later you will learn that the accent in the Czech language is dynamic (force), but much weaker, as a result of which often the initial syllables with short vowels are not perceived as stressed, and the stress itself is associated with the diacritic sign čárka over long vowels. For example, in the word zastávka (stop), the stress on the second syllable will seem more expressive to you, since the second letter “á” is pronounced long. For the correct pronunciation of such words, do not forget about the stress on the first syllable and stretch out vowels with the sign ‘.

World Ranking of the Best Universities in the Czech Republic 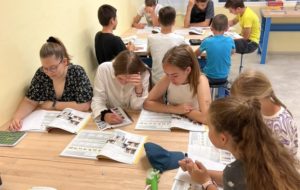 Czech language lessons for free. Stress in Czech does not automatically mean longitude vowel – longitude and stress are independent of each other!

If they are followed by ě or i/í, the consonants d, t, n are read softly, but this is not additionally indicated on the letter: děti [d’et’i], tělo [t’elo], něco [n’etso].

Czech lessons from scratch. Czech vowels can be long and short. A long vowel is pronounced almost twice as long as a short one. It’s important to really pronounce long vowels, because the longitude in Czech words can be meaningful:

Unstressed vowels in Czech are pronounced as clearly as stressed vowels. In Czech, the changing parts of speech are nouns, adjectives, verbs, pronouns and numerals.

Remember: The question Kolike…? cant be used to translate How much is…? This question is only used for calculations, e.g. Kolik je 1+ 1? How much is 1+ 1?

2. How to address a stranger

If you want to address a stranger (someone in the street, a policeman, waiter, shop-assistant etc.), say Prosim vas, … Excuse me (formal). Children can be addressed with Prosim té, … Excuse me (informal). Another option is Promiite,… (formal) or Promiti,… (informal).

A negative question is more polite than a positive one in this context. Note:

4. Foreigners living in the Czech Republic sometimes complain that Czechs speak English to them and therefore they have little opportunity to practice their Czech in real life. It partly because Czechs are eager to practice their English, German, French, Spanish etc, partly because they know Czech is not an easy language and they want to help foreigners or speed up the conversation. If this happens to you, simply say: Promifite, ale mizeme mluvit cesky? Sorry, but can we speak Czech? You could explain: Jsem cizinec/cizinka. | am a (male) foreigner/(female) foreigner. Uzim se cesky. I’m learning Czech. Above all, however, keep speaking Czech and let the people around you get used to it.

Review about studying at VSE

How to study at Charles University – review

How difficult is czech to learn? Comparison of czech and english-Distinction