Strange habits of the Czechs. Czech culture of life

Unusual czech habits. Culture of behavior in the Czech Republic

What is the most annoying thing about Czechs for a person who grew up in a different culture?

Even very loud! Everywhere and always. The fact is that among the Czechs it is considered indecent to sniff, but to blow your nose savorily at a table in a restaurant or at a lecture at a university is the norm. Everyone does it — children and adults, men and women.

How to use public transport in Prague.

Sometimes, you go to the subway, a pretty girl comes in and smiles. And the next moment she takes out a handkerchief, and you hear a loud blowing! It sounds like hell! But over time you get used to it, and one day there comes a solemn moment when you yourself blow your nose for the first time at the dinner table…

The rude habits of the czechs. Yes, it seems to me that the Czechs are sure that if you don’t move your jaws like a mad ruminant animal, while making a nasty sound, the gum will disappear from your mouth. They do everything so that it does not disappear.

3. Behavior in the Czech sauna

In the Czech Republic (as well as in Germany and some other European countries), almost all saunas are common for men and women. And everything would be fine: you quickly get used to the sight of naked people. But some Czech men over 40 years old can sit right above you in the sauna, and start wiping themselves with a washcloth (“combing” the top layer of skin). Or do yoga right above your head. It’s already harder to get used to this.

5 best places to have breakfast in Prague

4. What annoys me in the Czech Republic. «Tady v Česku mluvíme česky» 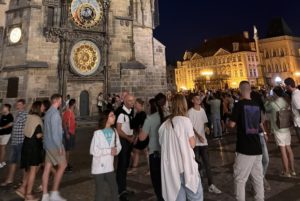 Which translates as — here in the Czech Republic we speak Czech. So you can be answered in any institution if you contact an employee in English. Yes, the small nation complex is working. They don’t want to speak English here. This problem does not concern the tourism sector!

5. Strange taste in clothes in the Czech Republic

The untidy habits of the czechs. If you stay in Prague for longer than a week and start walking not only to tourist places, but also to go down to the subway more often and look closely at people, you will definitely notice it. What are the only checkered fabric backpacks that Czechs (and Czechs) love so much that they wear with any clothes! Yes, and with dresses, heels too. Men here are burning with a secret passion for fishing trousers of indistinct color, indeterminate shape, and with a bunch of bulging pockets. And, of course, classics! In the summer in Prague, you can still see a citizen in socks under sandals.

Neither boys nor girls in the Czech Republic care a bit about how they look! The first thing that fell out of the closet, they put on themselves, as if they ran out into the street to take out the garbage. Czech girls have not heard about makeup at all and do not use it! That is why Russian girls (beautiful and well-groomed) are held in high esteem.

From my point of view – sometimes even too much. They love to rummage through discounted goods regardless of income level and spend a lot of time on it. A Czech friend of mine with an income of more than 80 thousand CZK always takes his own package to the store and refuses to buy eggs without discounts.

7. Czechs drink a lot of beer

A lot of beer. Many people can even afford a mug of beer at lunchtime, and after work they often get together to drink beer in the nearest pub. After a certain amount of beer, it is customary to order a “panak” (a glass of something strong). This is usually a classic plum or rum.

8. Despite the abundance of alcohol, most Czechs look quite fit. And all because they spend their free time actively in nature: cycling, hiking tours, rafting. One day my Czech friends invited me to go for a walk with them. At the thirteenth kilometer, already barely coping with shortness of breath and fatigue in my legs, I began to realize that my idea of walking in nature is slightly different.

9. Do you know what gestures were unusual for me in the Czech Republic?

Handshake in the Czech Republic. We have men who shake hands with each other most often. In the Czech Republic, every lady knows how to shake hands firmly with a man or another lady. It’s still hard for me to get used to it. When I see a hand, for a split second I still think “what is this, what is it for?!”. But here they shake hands only in business communication. Colleagues and friends Czech most often will not greet with a handshake. She will just raise her palm or wave.

One day, I went on a date with a Czech friend: we took a walk in the park, and then went to a cafe. By the way, no one is shy in public places here: they blow their nose right at the table, they can take off their shoes, but that’s not about it now. My friend’s sense of humor turned out to be on top, he was polite, but when it came time to pay, he asked for a separate bill. It turns out that in the Czech Republic, girls always and everywhere pay for themselves (gender equality, and what did you want).
In general, Czech guys are not bad, but be prepared for the fact that Czechs are unlikely to open doors and buy flowers as a gift to you.

Rules of Czech etiquette and manners of behavior

Czech mentality. How the Czechs live. Says a migrant