Memorial to the victims of communism in Prague 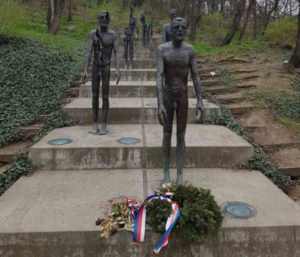 Memorial to the victims of communism in Prague

Unknown Prague Facts – The Memorial to the Victims of Communism in Prague is a series of statues commemorating the victims of communist rule between 1948 and 1989. It is located at the foot of Petřín Hill, on Újezd ​​Street in Prague’s Lesser Castle. Interesting facts about Prague.

It was opened on May 22, 2002, twelve years after the overthrow of the communist regime. The memorial consists of seven bronze figures descending down the stairs. As they move away from the viewer, the statues become more and more “destroyed”, their limbs are lost, and faults appear in their bodies. This is supposed to symbolize how political prisoners suffered under the communist regime.

Interesting facts about Prague – “U Fleku” 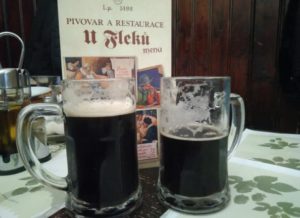 The oldest pub in Prague is called U Fleků and is located in Nowy Město. It has been leading its history since 1499. The name “U Fleku” was given to the restaurant in 1762, when it was acquired by Jacob Flekowski. In 1843, the famous beer “Flekovsky Lezhak” began to be brewed here, a bottom-fermented dark beer that is brewed to this day. Beer “Flekovsky Lezak” dark. Mug capacity: 0.4 l. (alk. 4.6%, density 13%).

Moreover, only this variety is brewed here and no other beer is available anymore. The atmosphere is quite interesting – in total there are 8 halls and the “Summer Garden”, but most of them are closed. There are a huge number of tourists and everyone is sitting at the tables almost right next to each other.

Reviews of tourists about the brewery “U Fleku” 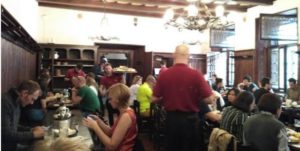 The oldest pub in Prague U Fleků

The portions are small, and not to say that you experience some kind of delight from the food.
From time to time, waiters come up to customers with a tray on which there are a number of 20 ml glasses and say this is traditional alcohol, such as take it and try it.
If you accept, they will write additional numbers on a piece of paper on your desk with an additional charge for mead. They mark who ordered what and how much on pieces of paper that they leave on your tables. The waiters will tip you into the check and rather big ones, without your knowledge! Remember, you can refuse and they will beat the check for a normal one. There are a lot of cheaper and cooler bars in Prague, even in the old town, for example, “At the King of Brabant”.
Address U Fleků: Křemencova 1651/11, Praha 1
Open: 10:00-23:00 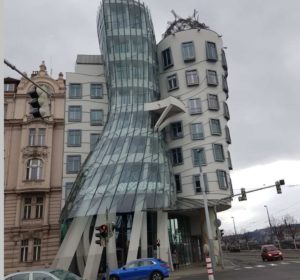 Interesting facts about Prague. Twisted building prague is a six-storey deconstructivist office building, consisting of two cylindrical towers: normal and destructive. The dancing building prague is an architectural metaphor for a dancing couple, jokingly called “Ginger and Fred” after the couple Ginger Rogers and Fred Astaire.

See also  5 best places to have breakfast in Prague

Dancing house prague architecture: one of the two cylindrical parts, the one that expands upward, symbolizes the male figure (Fred). The second part of prague fred and ginger building visually resembles a female figure with a thin waist and a skirt fluttering in the dance (Ginger). On the top floor of the dancing house in Prague is the Ginger & Fred Restaurant, with an area of ​​679 sq. meters. The first and basement floors are occupied by a conference center with an area of ​​400 sq. meters and cafes.
Address of the building of the Dancing House in Prague: Rašínovo nábřeží 1981/80 120 00 Praha 2-Nové Město, Czech Republic. Phone number: +420 221 714 444 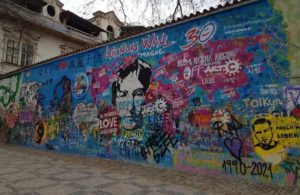 The John Lennon Wall in Prague

The John Lennon Wall in Prague is the fence of the Maltese Garden in Prague in the Mala Strana region. Since the 70s, there has been a tradition to paint and paint the wall with pictures in honor of the musician John Lennon. The wall is considered one of the symbols of the struggle for freedom and against the communist regime. The graffiti on Lennon Wall is not considered vandalism by city officials; on the contrary, the cultural value and symbolic meaning of the object is emphasized.

The oldest cafe in Prague 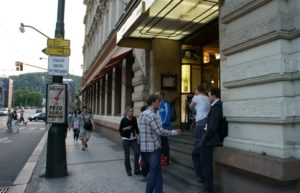 “Slavia” is the oldest cafe in Prague 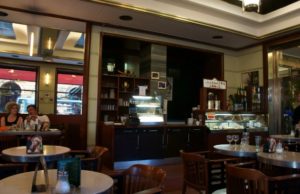 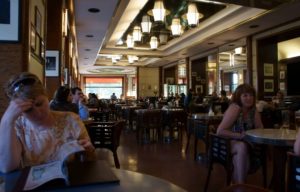 “Slavia” is the oldest cafe in Prague, it has been operating since 1881. The cafe is located near the Charles Bridge on the banks of the Vltava River in a beautiful old building. The bohemia of Prague loves to gather in it – the National Theater is located opposite, they say that the former President of the Czech Republic Vaclav Havel liked to visit this cafe. The cafe is visited by politicians, not only past ones, but also current ones. At the time of our visit to the cafe, the waiter said that every Friday, after work, the prime minister and his wife come to the cafe to have dinner and listen to music. The address of the cafe “Slavia”: Národní 1, metro station Národní trída. 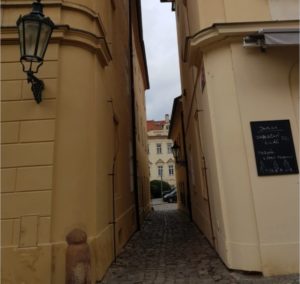 The shortest street in Prague is only 27 meters long and is called Jiřího Červeného. You can find it on Kampa. This is not only a short, but also a very narrow street. 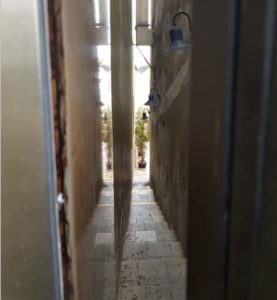 The width of the street is only 70 centimeters. The length of the street is 15 meters. It is not flat, but has a very noticeable slope – it goes down to the river. Therefore, in order to make it comfortable to walk along, steps were made along its entire length. This place is of interest as an urban planning incident that has developed historically. The complaint of one of the tourists in Prague that the street can be dangerous for very fat people only kindles the interest to visit it and check everything for yourself.

But it’s not really a street. Initially, this is a fire passage between houses, and it is the last one preserved in the city. Prague councilors ordered the construction of such streets after devastating fires in 1503 and 1541. This was supposed to slow the spread of fire in a densely populated area where wooden houses used to stand wall to wall. In the past, there were many such streets in Prague, and their size corresponded to the philosophy of that time: the smaller, the better.

The street has no official name; people sometimes call it Vinarna Čertovka after the name of the restaurant, to the terrace of which it leads. A less commonly used name is Drunken Lane. At the moment, the passage through the street is closed by a door and the photo was taken through a crack.

The smallest house in Prague. Interesting facts about Prague

Interesting facts about Prague. The smallest house in Prague is located on Anezka Street in the Old Town at number 4/1043. Its facade is only 2.25 meters wide. Rare in Prague – a red plaque on the facade, above the arch of the doorway, informs about its unique dimensions. When the alley between neighboring houses was turned into a dwelling, a certain lady for forty years, until 1922, kept a brothel here.

Little known Prague facts. The deepest well in Prague is located in the 3rd courtyard of the Prague Castle. It has been operating since the Middle Ages. The depth of the well reaches 70 meters: it reaches the water level in the Vltava. The water level in the well itself reached 46 meters.

The most beautiful modern building in Prague 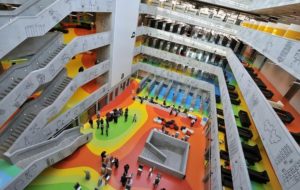 The most beautiful modern building in Prague, according to Praguers, is the National Technical Library. The building has a curved shape with a base of approximately 70×70 meters, 9 floors, 3 of which are underground (car parks and storage). The building was built taking into account modern European energy saving trends and therefore consumes a minimum amount of energy. The interior is dominated by a large atrium with a rectangular plan. The concrete walls are decorated with drawings by Romanian artist Dan Perjovschi.

The oldest church in Prague is not the Church of St. Vitus, but the Church of the Virgin Mary, built at the end of the 9th century on the Prague Castle.

The oldest bridge in Prague 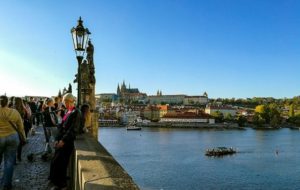 Facts about Prague – The Vltava River flows through Prague for 30 km. Its widest point reaches 330 meters. On the territory of the city, the Vltava washes 9 islands. The oldest surviving bridge in Prague, the Charles Bridge (built in 1357), also passes through it. Charles Bridge in Prague is a real Mecca for tourists. Both locals and guests of the Czech capital come here at any time of the year for the sake of magnificent architecture, the spirit of the times and to make a wish that will surely come true. Точный адрес моста – Karlův most, Praha 1.