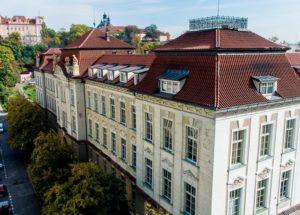 To begin with, a little history. In 1920, on the basis of a state decree, the following areas were allocated from the Faculty of Philosophy of Charles University: mathematics, natural sciences and pharmacy. On the basis of this, the fifth faculty of the university arose. Subsequently, in 1952, this faculty was divided into 3 parts: geological and geographical, biological and physical and mathematical.

The division of faculties existed until 1959, when the Faculty of Natural Sciences was re-founded, but without the Physics and Mathematics department.

Become a biologist in the Czech Republic. The new structure of the Faculty of Natural Sciences was approved in November 1989.

According to the areas of specialization, the Faculty of Natural Sciences of the UK is organizationally divided into 4 departments: biological, geographical, geological and chemical. Within its framework, there are several research and teaching institutions.

Profession biologist in the Czech Republic

The training of students of biologists, chemists in the Czech Republic for a bachelor’s degree and for continuing master’s programs is carried out according to the following programs:

A microbiologist in the Czech Republic specializes in the study of microorganisms, and first of all, those that can cause the development of diseases in animals and humans. He also tests and develops medicines, various chemicals for the needs of industry, conducts expertise and research.

Geneticists specialize in working with patients or in conducting laboratory tests. Usually specialists combine medical practice with scientific activity. Geneticists study the structural features of chromosomes and hereditary molecules, as well as genetic changes and their consequences for individuals and populations.

Currently, the Department of Genetics and Microbiology of the Faculty of Natural Sciences in Prague has nine groups that are engaged in research in various fields of molecular and cellular biology, genetics, microbiology and virology.

The teaching of biology students in the Czech Republic is carried out in two directions: teaching and research. Graduates of the faculty with a research specialization work in state or corporate research institutions and centers. Graduate teachers work in public or private schools.

The Plant Genetics Laboratory is engaged in the study of intraspecific variability of various functional and structural characteristics of economically important plants, especially in relation to possible causes of the heterosis effect.

Charles University – the profession of genetics in Prague

The research topic of the Laboratory of Bacterial Genetics is devoted to the regulation of the general stress response in a model of the bacterium Bacillus subtilis and adaptive mutagenesis under the influence of physical stressors. Another topic that the laboratory staff is engaged in is the study of the physiological mechanisms that allow soil bacteria to cope with the effects of chemicals that pollute the human environment as a result of human activity. A team of staff and students of the Laboratory of RNA Biochemistry studies the basic principles of protein synthesis in eukaryotic cells.
The main research topics in the Laboratory of Yeast Colony Biology are the molecular aspects of development and extracellular signaling in yeast colonies as a model of multicellular organized structure

See also  IT education in the Czech Republic

At the Department of Virology, research is focused on small DNA viruses from the family Polyomaviridae and Hepadnaviridae. Laboratory scientists study the interaction of viruses and their products with various host cell structures and the functional consequences of these interactions. The Laboratory of Molecular and Tumor Virology studies small open DNA viruses associated with people with tumors.

The Laboratory of Bacterial Physiology in the Czech Republic at Charles University deals with the function of bacterial toxins that act on the cytoplasmic membrane of the target cell. He is also engaged in the adaptation of the bacterial membrane to stress and its interaction with surfactants, as well as the interaction of bacterial cells with nanomaterials.

The entrance exams of the Faculty of Natural Sciences of Charles University depend on the direction (there may be both a written test in the same biology, and enrollment without exams).

One of the main features of the microbiologist profession is a high level of responsibility. Quite often, his work is aimed at the study of potentially dangerous microorganisms, so compliance with workplace safety rules for such employees is of exceptional importance.