How is the study of 1 LF UK Charles University

A graduate of any medical faculty in the UK, having received the status of a Master of Medicine (6 years, general medicine), can work and develop in absolutely any field of medicine in the Czech Republic: adults, children, research – anything. UK medical faculties do not have the restriction that some of them are pediatric and some are “for general adult medicine”.

Many mistakenly believe that it is possible to become a pediatrician in the Czech Republic only after 2.LF, because this is a “pediatric” faculty. Such a misconception appeared due to the fact that historically there was only one medical faculty of Charles University.
Then 1lf uk charles University began to separate, and so 2.LF (pediatrics) and 3.LF (hygiene, immunology) appeared. Previously, these faculties were really divided according to their profile, but now they are not. After completing a master’s program (general medicine) at any of the UK medical faculties, you can further specialize as you wish.

Assistance for studying at the faculty of medicine in Prague

A master’s degree in medicine from any of the medical faculties is very prestigious. Different faculties differ only in different programs and approaches to teaching.

UK faculties offer 11 residence halls in Prague, 2 in Hradec Králové, 3 in Plzeň and those who do not have a residence permit in the city of study can apply for a partial reimbursement of living expenses. The scholarship for living at Charles University is paid once every three months in the amount of 1800 CZK. 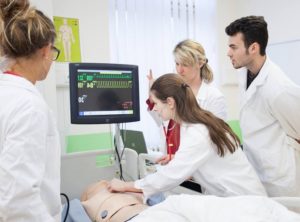 Here is the largest anatomical museum, which presents hundreds of exhibits from the evolution of worms to the stages of human development – you can see absolutely everything there!
For each academic year, we have a curriculum that includes certain subjects that we must take in order to complete the course.

Features of medical education in the Czech Republic

Enrollment in the medical faculty of Charles University – student registration

How is the study of 1 LF UK Charles University

In the 1st year, it is enough to pass all the subjects to complete the course, but in the 2nd year there will be a mandatory practice in the hospital.
If you have completed all this, then you are moving on to course 2 1.LF

In the 1st year, it is enough to pass all the subjects to complete the course, but in the 2nd year there will be mandatory practice in the hospital.

Is it hard to study at the 1st Medical Faculty of Charles University?

Communicating with many people who study at the 2nd, 3rd Faculty of Prague or in other cities of Charles, I have a reasonable impression that it is most difficult to study at my faculty.

Anatomy, histology and embryology from the 1st year, trips to the anatomical room (where the corpses are) after a couple of months of training. We don’t have a smooth “immersion” in medicine, we have medicine already from the 1st year, from the first day of training, probably that’s why studying for 1.LF is considered difficult.

Since we have the largest anatomical museum, we have the largest department of anatomy, we have a lot of corpses for dissection, they “come” to us regularly, and we are trained on high-quality, “fresh” preparations. By the way, an interesting fact: in the building of our faculty Anatomický ústav 1.LF UK (Department of Anatomy) in a large lecture hall, the oldest marble table for dissecting corpses was specially preserved as a tribute to tradition. It is no longer used for its intended purpose, but it is preserved in its original form.

Is it hard to study medicine in the Czech Republic?

Winter semester. For the first six months it was easy for me to study, anatomy and histology were halfway through the study, the rest of the subjects were simple, tests were written, classes were not skipped — I even had the opportunity to relax a lot and do my hobbies.

See also  Features of medical education in the Czech Republic

I’m trying to remember myself in winter, everything was set up mechanically: class, test, home, rest, teach, rest and sleep.

Is it true that my faculty specifically expels as many students as possible?

The truth is that it is not easy to study at any medical faculty, and the complexity of our faculty consists only in the fact that a first-year student faces real medicine from the first day and they immediately want a lot from him. And the sad truth is that 98% of all unsuccessful students decide to take their documents from the university themselves and do not use all attempts to pass the exam. It’s hard psychologically to continue doing something when you fail several times in a row, and it doesn’t matter if you are Czech or a foreigner – it’s hard for everyone.

And only about 2% are people who used all the chances, but still couldn’t.

And then it’s not so easy to “fly out” from the faculty, if a person passes one of the exams (anatomy or histology), and the second one does not, then he gets into the “Meziročnik” – it’s like staying for the second year and studying together with freshmen the subject that you did not pass. Then you need to pass this subject together with everyone and go to the second year. It’s a waste of a year, but not fatal, but a chance to stay at the faculty if you can’t pass something.

I’ll tell you a secret that I know several stories from my friends who were given a chance at our faculty. When a person cannot pass a subject three times, which is not so important, but is still needed – the teachers unsubscribed the student from the term (the date of the exam) and it turned out that the student “did not come” to the exam and did not waste an attempt. Thus, they were given a fourth chance.

The professors of 1.LF UK have no goal to expel students, they can even give you a chance or turn a blind eye to something, all this is just a human factor.

The second wave of admission to medical faculties Charles University

Errors in exams in the Czech Republic for medical