Prague apts for rent. The Czech Republic – story to rent flats in Prague without a realtor

This year I decided to move to an apartment from a hostel. I’ve heard a lot about what it’s like to look for a place to live in Prague and was preparing for the worst. I must say that the search for an apartment can take 2 months or more.

It is quite difficult to look for an apartment without a realtor, because apartment owners do not want to bother and entrust the search to real estate agencies. The realtor puts ads in newspapers and on the Internet. You agree with him about viewing the apartment. This does not oblige to anything, very often a dozen of the same applicants come to see at the same time. Some do not even enter the threshold, evaluate the house from the outside and leave.

The owner of the apartment does not pay anything to the agencies, the tenant does it. Such payment is called provision (provize). It is non-refundable, because it is considered a payment for services to a realtor and usually amounts to a monthly rent for rent.

The real estate agency takes remuneration for its services in the amount of a month’s rent.

Reviews to rent an apartment in Prague without a realtor

If you liked the apartment, it does not mean that it is “yours”. You will have a meeting with the owner, who needs to prove his decency. Considering that you are a foreigner, it is difficult three times.

I have already had refusals already when talking to a realtor on the phone. You are directly told that the owner wants a person from the EU. By the way, this is discrimination and you can sue for this. I think we were incredibly lucky to get a profitable apartment among all that we saw.

We were initially puzzled by the search for a two-room apartment in a new building. The Czech Republic has its own concepts of planning. For example, a two-room studio is called “2+kk” – this means one separate bedroom and a living room with a kitchen. If it says “2 + 1” – in this case, the kitchen will be separate. I have not met a new building where the kitchen was separate, on the contrary, I was satisfied with this option. 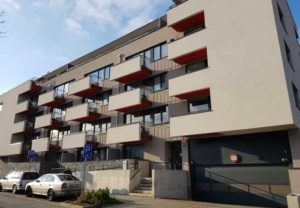 A new building in 2019 with an underground garage

Living space rent Prague. New buildings are mostly located on the outskirts of Prague or just in remote areas from the center. In the historical centers and districts of the city there are premium class new buildings like Villas or penthouses on the upper floors. 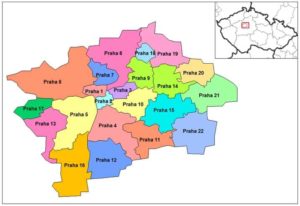 Finding a place to live in Prague is not easy. The market offers are limited. Apartments in Prague do not have time to be built under the growing demand. This can also be attributed to a growing economy and low unemployment. Everyone wants to live in a convenient place, where ideally there is a subway. As close as possible to work or study, because no one wants to spend time in transport. But the more prestigious the place of residence, the more expensive it is.

See also  Rules for living in the dormitory of Charles University

Electricity is paid separately. To do this, you need to personally conclude a contract with an electric company for the provision of services. The average price in Prague is 4.83 CZK/KW.

Yes, electricity in the Czech Republic is supplied by several private companies among which you can choose. About the same way you choose which Internet to connect. By the way, you also need to register it for yourself and pay separately. The price of home Internet from 300 CZK / month.

Experience to rent an apartment in Prague without a realtor. In parallel with the inspections, we continued to look for suitable apartments. In the Czech Republic, there are sites with ads where real estate owners put up directly and agencies that you can’t immediately recognize. We considered the fact that we would have to pay the agency / realtor, because it’s easier.

But there is also a well-known site bezrealitky.cz. His main idea is to communicate directly with the owners of real estate, who do not need to pay provisions. But there are also often realtors or even scammers. The administration is trying to monitor and prevent this, but not at lightning speed. The usual divorce is the announcement of an apartment for a suspiciously favorable price. When contacting the owner, it turns out that he is now abroad, but he likes you. He is ready to hand it over to you, but a deposit is required, which you will pay now. Then, probably, it is clear.

Example of apartment 2+kk on bezrealitky.cz

We stumbled upon an apartment and we were assigned a day of inspection. When we arrived, there were already interested people there and they were just arriving after us. This apartment is owned by a doctor and his wife, who conducted an excursion. During the inspection, the star of the Czech TV series lived there with her husband and baby, who were going to leave for a more spacious apartment because of the child in 2 weeks. Naturally, the housing was furnished with their furniture and things, so it was possible to estimate how everything would look in practice. The usual questions about heating, electricity costs, what kind of Internet is available.

Together with us, we were examined by a man who said that he lives in a dacha outside Prague, but wants an apartment here to come sometimes. In short, you can’t say that. Such muddy explanations reduce the chances that you will be chosen.

Advice to rent an apartment in Prague without a realtor. The owner may not always ask questions directly, it would be better if you start talking about yourself. Who are you by profession, where do you work, with whom will you live, do you smoke, do you have animals, how old are you, how much do you plan to live here. This information gives the owner an idea of your adequacy, ability to pay and how much you will disturb everyone around.

Czechs are wary of foreigners, especially those who have just arrived in the country.

You can come to the meeting in the most expensive clothes and bundles of money, but this is not the way to convince the owner. The reason is your bad reputation in absentia. Apartment owners communicate with each other in chat rooms and Facebook groups, exchange blacklists and stories. I was told how foreign students smoked hookah all day, it fell on the parquet more than once, which made it unusable. In addition, complaints from neighbors about the noise of falling, screams and smell. Or how foreigners in the Czech Republic, coming to work, suddenly take with them the equipment of the apartment: from the microwave to unscrewed faucets. All these stories create an idea of bad foreigners in the Czech Republic, who already have not the best status here.

See also  How to rent an apartment in Prague for a student. Where to look flat?

Story to rent an apartment in Prague without a realtor. We told the landlord that we graduated from university in the Czech Republic and are both working now. They named the age and positions. They named the companies and where they are located. We mentioned that we have been living in a hostel for several years and already want comfort. Even before the meeting, we argued that we could conclude a contract for 2 years, although usually everything is done for 1, then extended. All this gave an idea about us, but because we are foreigners in the Czech Republic, we do not have permanent residence, we expected rejection.

Feelings after the meeting were like after a date or a job interview, then you think “that’s how you should have said…”. What was our surprise when a couple of days later the owner wrote to us that we made a huge impression on his wife and immediately liked her. So we got the best apartment of all that we have seen.

About housing: it is 2+ kk, about 60 sq.m. with a separate large toilet, a storage room and a spacious hallway. There was already a dishwasher in the kitchen, which was very important to me. There is a bathtub in the bathroom – important for my girlfriend. Also attached to everything is a basement storage room for junk and a garage space in the house for a car.

How to pay for utilities

Reviews to rent flats in Prague without a realtor. The apartment costs us 17,000 CZK/month. To this 3000 deposit for payments. Additionally, I pay for electricity 710 CZK/month and Internet UPC 520 CZK for 150 mb/sec.

We divide the garbage into general, paper and plastic. There are also separate round containers for glass. I throw bottles and cans at them, which cannot be handed over at the store. Separation of garbage on conscience, no one checks you. Each house has 2 containers for mixed garbage. This garbage is collected every morning. Containers with plastic and paper are on the street and there are not so many of them. They don’t always have time to take them out before they overflow. The collection takes place a couple of times a week.

The Council. What you need to know about pets

Pets are allowed to be kept in apartments. Everything, of course, depends individually on the owners. In the Czech Republic, they love dogs and probably consider the fact that you can have a menagerie. Therefore, if you have an animal that does not require special conditions, most likely there will be no problems with this. I have already written earlier that animals are allowed to be kept in dormitories, let alone an apartment where you can always discuss the possibility with the owner.

How to rent an apartment in the Czech Republic for a student: search, selection, contract, payments, departure