How is enrollment in the students of the Czech Republic

Time to read: 3 minutes
Content hide
1. Decision on admission to a university in Prague. Questions and answers
2. Похожие записи:

How to become a student in the Czech Republic. Admission decision to a Czech university

1. Decision on admission to the Czech university “Rozhodnutí o přijetí”. It is sent to you after successfully passing the entrance exams, and if they are no exams, simply in response to the submission of “přihláška” (application for admission to a Czech university). “Rozhodnutí o přijetí” is not a full confirmation of your status as a student of the Czech Republic, it is only a letter of intent from a Czech university to accept you when you appear for enrollment in students to report missing documents such as a certificate of knowledge of the Czech language B2 and nostrification of previous education.

Decision on admission to a university in Prague. Questions and answers

Is it possible to enroll in students of the Czech Republic for several places? Will this not affect the reduction by one year of the 4 years of free undergraduate education?

If I enroll as a student at two universities at once, how much free education will I lose?

Student enrollment in Prague. If you enroll in students in several places, then each will go for a period of free education, so you should not do this. You will lose a free year in each. Since not all universities expel after the first semester, there is a big risk of losing a year.

Student life in Prague. When does the first session in the Czech Republic end? 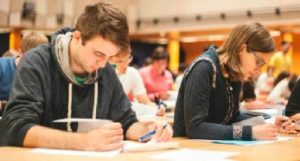 Czech Republic education for international students. Specific dates depend on the university, but basically it starts in October and lasts until February. If you did not pass the first time, there is an opportunity to retake it (in each university).

If I get kicked out after 1 session, how much time do I have to find a private university?

It also depends on the university, sometimes they immediately report that you are expelled, sometimes not. In any case, you have time until the end of the session, the official dates of which will be indicated on the official website.

Education in English at private universities in the Czech Republic

In the regional – less. Basically, they are expelled in technical specialties, because it is easy to enter there, because. the competition is not that big. On humanitarian – mostly delayed, because. getting there is more difficult.

Studying in English at Charles University. Prague universities in English