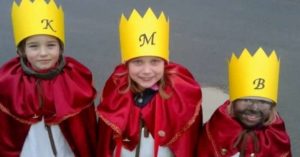 The Feast of the Three Kings

On January 6, on the streets of Prague and other Czech settlements, you can meet people with crowns on their heads, which will have one of the three letters B, M, K, or see the inscription on the doors K + M + B +2023.

The last Christmas markets are finishing their work, the New Year and Christmas holidays are coming to an end. And they end with a holiday – the Day of the Three Kings (Tří králu).

The three kings are three wise men from the East who, according to the Gospel of Matthew, brought gold, frankincense and myrrh as gifts when Christ was born. A star burning over Bethlehem showed them the way.

The Feast of the Three Kings in the Czech Republic, celebrated on January 6, indicates the moment when Christ appeared not only to the Israeli people, but to the whole world. According to a long tradition, adults and children dress up in three kings on this day. The three kings also represent three races: white, yellow and black, as well as three periods of life: childhood, youth and old age. Mummers go from house to house with carols, carrying with them consecrated chalk, calendar and sugar, representing gifts. The participants of the procession also collect donations in a sealed piggy bank, which then go to help those in need.

According to another tradition in Catholic lands, the feast of the Appearance of Christ (January 6) is written in consecrated chalk on the doors of houses and stables K + M + B + year.

How to celebrate the holiday of the three kings in the Czech Republic? 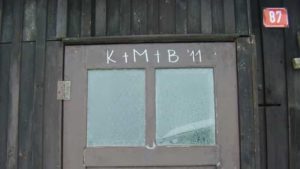 The Czechs came up with a playful interpretation of this inscription. The deuce here is replaced by the letter Z: K + M + B +Z, each letter means one of four items: B = Klíče (keys), M = Mobil (mobile phone), B = Brýle (glasses), Z (2) = zuby (teeth), and as a result, a reminder for the older generation “when leaving home, do not forget the keys, mobile phone, glasses and teeth”

On this day, even before sunrise, the girls washed their faces with snow so that the skin was snow–white; in some houses they lit identical candles and believed that the one whose candle went out earlier would die first, and besides, the direction of the smoke determined where a person’s soul would fall: smoke up – the soul would fall into the sky (nebe), the smoke down said that the soul would go to hell (peklo). Nowadays, on this day, January 6, many houses in the Czech Republic are cleaning the Christmas tree.

In addition, the date marks the beginning of the Masopust, a festive period that ends with a three-day carnival in the second half of February.